An old man is sitting on the floor of a small cottage. A few buckets of paint are strewn about the dwelling, one in the kitchen, one on the table, one next to where the man sits on a bed sheet laid down to protect the carpet from the paint. The sheets have done nothing to protect his clothes, though. He moves his paintbrush quickly, reckless but confident after long days spent painting the rest of the cottage. The sound of the brush is accompanied only by a radio blaring classic rock music, and generic and uninspiring words trying to form themselves into a conversation with the young man sitting on the other side of the wall.

The young man sits on the floor, on top of a bed sheet, paintbrush in hand, paint bucket beside him just as the old man does, his clothes just as spotted with paint. His hand moves with less practice with the paint brush. The strokes are careful, patient and precise, but no less effective in slowly turning the colors of the cottage from old to new, dull to bright, white to whiter. If you stood at the doorway, the wall would appear a mirror, the men sitting in identically empty rooms, in the same position, making the same strokes with the brush, tapping out the same beat to the background music provided by the radio. They both carefully place the brushes into the paint jar instead of their mugs of tea.

A girl walks into the cottage. The conversation between the men ceases as the girl speaks to her father. The young man sits quietly on the other side of the wall, half-listening but occupied by his own thoughts. The old man and young girl’s voices eventually slowly, almost imperceptibly become louder over a few minutes. The young man does not notice at first, until they become angry, first the old man’s and then the girl’s. They begin arguing about something. The words become louder and angrier until they are shouting. Harsh words are exchanged by both, and eventually, sounds of frustration escape the girl and her footsteps signal her exit from the cottage as the young man sees her heading away through the window. The old man follows a moment later, shouting after the girl, “I’m your father, don’t you fucking talk to me like that, show some fucking respect.” He halts just outside the cottage, letting his daughter continue on. A cigarette and lighter appear in his hand. The heavy silence after a storm is left behind in the cottage too loud for the radio to be overheard. If you were still watching from the door, the young man has simply moved seats, paintbrush still moving carefully, patiently, seemingly unperturbed, as if he had not heard the chaos from the other room.

“Don’t have kids,” The old man says, raising another cigarette to his lips. Two finished butts lay on the ground. The young man continues past on the small walkway without acknowledging the comment. When he returns to the cottage the old man is inside painting once more. Neither of the men tries to pick up their conversation from earlier. The old man still angry, the young man still indifferent.

“I’m cross for getting angry at my daughter,” the old man says, offering up the first words. The young man has come into the kitchen to get more paint. The young man’s attention appears to entirely be on the paint slowly dribbling out of the can and into his bucket. “Did you hear me?” the old man says. “Hmm?” the young man replies. “I said I’m real cross at myself for what I said to my daughter.” The man says again. His happy and conversational tone indicates otherwise.

“Because I shouldn’ta said what I said to her.”

“Maybe you should apologize,” the young man says, replying after a short pause. He knows this is not what the old man wants to hear.

The old man’s expression changes from jovial to confused to angry, the smile on his face slowly turning into a scowl. “Now why would I go apologizing?”

The young man shrugs. “You said that you got mad at yourself. For getting angry, for yelling at her, for swearing at her. Sounded like you felt bad about it.”

“Yeah well she was sticking her nose where it didn’t belong, eh. She was trying to make trouble about something that was none of her business, and she swore at me first. It ain’t my fucking fault I got angry.” The old man says, his voice raising throughout, angry again.

The young man turns around with his now full paint bucket. He walks past the old man’s wrathful stare. “You brought it up.” The young man says, indifference clear in his tone. He goes back to the other room leaving the old man alone with himself. Sitting on the floor again, the young man feels old. 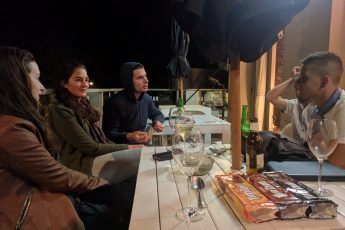 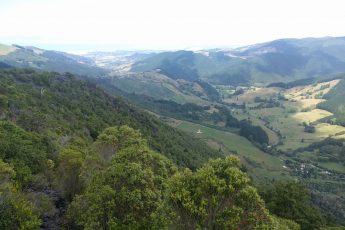