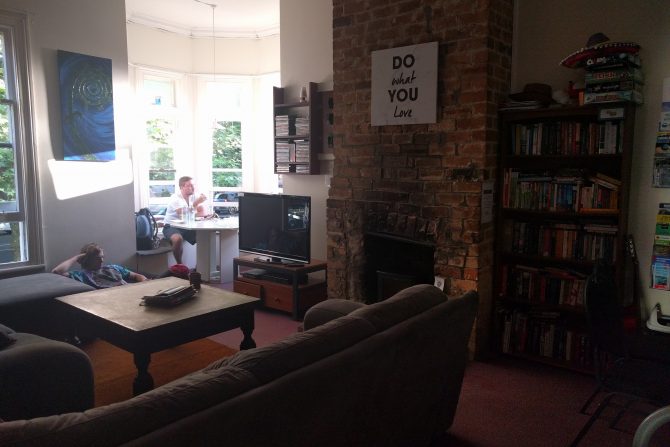 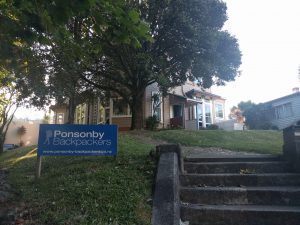 I chose the hostel I’m staying at because it is out of the city a bit and was not so modern and bustling as the hostels in Auckland proper. Ponsonby backpackers self-selects for a relaxing environment, for which I am thankful. The people here are enjoyable, warm, kind, and come from all walks.

Phillip, a German carpenter, is off to do some farm work before starting his journeymanship. A quiet presence and friendly confidence surround him. Speaking about our futures, we discover opposite yet understandable positions. He has come here to delay his entry into manual labor, he does not see himself doing it forever. I yearn to escape into a career that won’t confine me to an office forever.

There are a few other Americans here as well.  Stew is from Dallas, a bit older than the normal hostel crowd, but genuine and good-hearted, he is not what you would expect from a Texan. He fits right in despite his age.  Kyle is a young kid from Michigan who has fled his family farmer each winter for warmer climates the last few years. From Australia to India to New Zealand, travel has imparted a world-experience and generosity in him that is magnetic. Also, he looks like a young Oberyn Martel from Game of Thrones.

I quite enjoy the Brits here as well. Zara, a nurse who up and moved the last year she was able to with the holiday working visa is seeking similar respite from the world as myself. I see a mirror of my own goals in Zara’s, in search of adventure and investigating possibilities for the future. Greg, from Scotland, does not have the typical Scottish accent but does have the fantastic British humor. Bald, a bit scraggly, and self-admittedly ill-suited for manual labor, his next plans after spending the last two years in New Zealand only include finding a way to stay longer. Elvis is the youngest traveler I’ve met here. At only 22, he has already been gone from his home in the U.K. for over two years. Long blonde hair, a carefree attitude, and a goofy personality, it is easy to feel an affinity between him and myself. A fan of fantasy and reading as well. A life-long farmer since working on his family’s chicken farm, he has few aspirations to do naught but farming and travel and live simply. Zara, though English herself, mistook him for an Aussi. He took humorous offense at this, but it is hard to blame her. 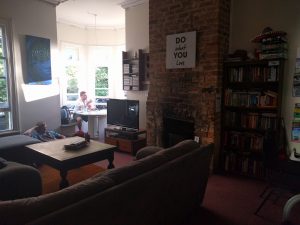 “I think it’s this way. Trust my sense of direction.” Elvis says, not very confidently. Kyle and I look at each other skeptically.

“Are you sure you don’t want me to check my phone?” I say.

“No don’t check. I walked this way yesterday,” Elvis says, his English accent makes the confident yet precarious tone of his statement fail to be reassuring. The three of us are coming back from a car fair, all having arrived in the last week and needing a car. Kyle wants to buy a van or station wagon and build his own frame for a bed and such, though lacking the resources it is the idea that excites him rather than actually being able to. Elvis’ budget is a bit more restricted, he is looking for something simple to get him out of the city where he feels his time is wasted once he is gone regardless of his enjoyment while he is here. I am willing to spend a bit more for a fully supplied camper van, something I can live out of on the road due to my desire to get away from society for a spell.

“We are going the wrong way,” I say after bringing up a map. Elvis makes some disgruntled sounds that Kyle and I laugh at. Elvis continues to proclaim he knows where he is going, but we take a bit a circuitous route, and after a two hour walk back to the hostel, we are ready to sit for a bit. Thankfully we did not have to do it twice, Stew gave us a ride on his way out to visit a beach this morning.

“What’s the worst job you’ve ever had?” Janna asks. A yoga class and a simple dinner later, Janna, Pam, Kyle, Greg, Elvis and I are sitting around the table in the kitchen. Simple answers of Dunkin Donuts for me, winter farm work for Kyle, and Tim Horton’s for Pam (She is Canadien if the Tim Horton’s wasn’t enough of a hint.).

“I used to put people on a list when they died,” Greg says. The timid English style of the statement can’t help but bust people into laughter around the table. “When I was at the interview for another job they asked why I wanted to leave my current role. Oh, I maintained the list of dead people. ‘…Oooh, well that’s understandable.’”

“I’ve shoveled so much chicken shit in my life. Mounds you wouldn’t believe,” Elvis says. “Piles as high and as wide as this table here. More shit coming down a conveyor belt all the time. And you’re just shoveling it through this little opening. And sometimes you think you’re stepping on a pile that’s solid, but it’s not. You sink in up to your knee.” Our groans and laughter of disgust growing slowly more horrified as he goes on. “You pull your leg out and it’s covered in this black sludge, and there is this smell you wouldn’t believe. You can’t get it out of your clothes. You have to keep a spare set around. And it really gets into you. Sometimes when you’re out at night and you start sweating, you hope no one notices but you stink like chicken shit.”

Thoroughly grossed out, we turn to different conversation topics. After a while, Kyle brings out his collection of teas. Greg and Elvis, the good Brits they are, show us right proper tea etiquette. Elvis covers his mug with a dishcloth to keep the heat and flavor in. 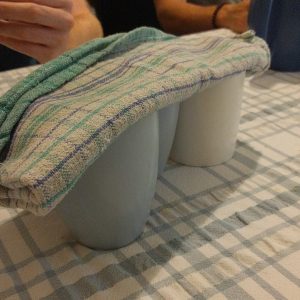 “What’s that?” Elvis says as he puts his ear to the mug. “You’re done steeping? OK, guys, you can drink your tea now, it told me it was ready”

“What’s everyone’s tea say?” Kyle asks. There is a quote on the tag of each tea bag.

“You can’t spell team without tea,” Greg says. Everyone laughs.

“It doesn’t really say that does it?” Someone asks.

“No of course not, but that doesn’t mean it’s not true.” 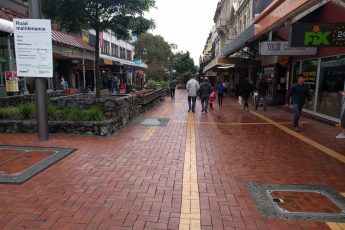 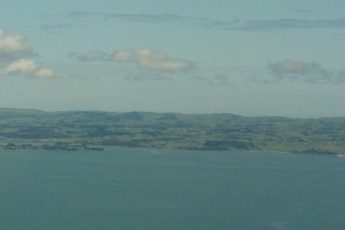